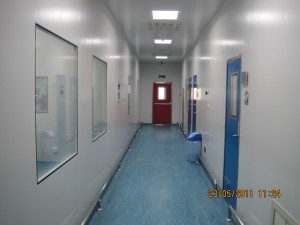 (Taken from Wikipedia, the free encyclopedia)

Cleanrooms can be very large. Entire manufacturing facilities can be contained within a cleanroom with factory floors covering thousands of square meters. They are used extensively in semiconductor manufacturing, biotechnology, the life sciences and other fields that are very sensitive to environmental contamination.

The air entering a cleanroom from outside is filtered to exclude dust, and the air inside is constantly recirculated through high-efficiency particulate air (HEPA) and/or ultra-low penetration air (ULPA) filters to remove internally generated contaminants.

Staff enter and leave through airlocks (sometimes including an air shower stage), and wear protective clothing such as hoods, face masks, gloves, boots and coveralls.

Equipment inside the cleanroom is designed to generate minimal air contamination. Only special mops and buckets are used. Cleanroom furniture is designed to produce a minimum of particles and to be easy to clean.

Common materials such as paper, pencils, and fabrics made from natural fibers are often excluded, and alternatives used. Cleanrooms are not sterile (i.e., free of uncontrolled microbes)[1]; only airborne particles are controlled. Particle levels are usually tested using a particle counter.

Some cleanrooms are kept at a positive pressure so that if there are any leaks, air leaks out of the chamber instead of unfiltered air coming in.

Some cleanroom HVAC systems control the humidity to low levels, such that extra equipment (“ionizers”) is necessary to prevent electrostatic discharge (ESD) problems.

Low-level cleanrooms may only require special shoes, with completely smooth soles that do not track in dust or dirt. However, for safety reasons, shoe soles must not create slipping hazards. Access to a cleanroom is usually restricted to those wearing a cleanroom suit.[2]

In cleanrooms in which the standards of air contamination are less rigorous, the entrance to the cleanroom may not have an air shower. There is an anteroom (known as a “gray room”), in which clean-room clothing must be put on, from which a person can walk directly into the room (as seen in the photograph on the right).

Some manufacturing facilities do not use fully classified cleanrooms, but use some cleanroom practices to maintain their contamination requirements. 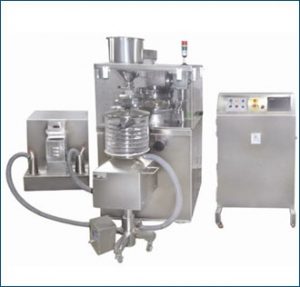 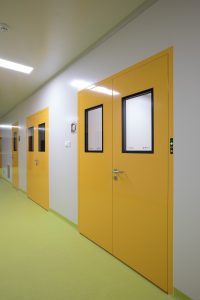 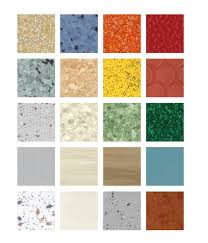